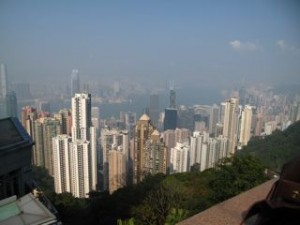 I know, I know, I talk about Hong Kong too much, but I just  feel so extremely lucky to be located so close to Hong Kong. Trains leave from the Guangzhou east railway station every ten minutes to Shenzen where I can just hop over the border and ride the subway into central, or if I’m feeling a little more lazy and have a few extra bucks I can simply take the Kowloon direct train all the way in.

The nostalgia of arriving out of the subway into the bustling tight fitting city has not been lost on me and seems to grow each new exit I ascend from. I am also becoming more and more familiar with the city itself which can always be a gratifying feeling in such a difficult city to navigate.
I definitely have been sticking to certain places I know and mostly because visitors come and have never been to Hong Kong so of course I show what I know. I had the pleasure of traveling through Hong Kong with my mom and brother and it was a blast. We had a nice hotel ate delicious Cantonese food by night while wandering the streets for nic-nac’s and of course hit up Maxims for a little mid-day dim sum. My brother and I attempted the night life but never really discovered anything to our liking so mostly drank 7-11 beer while shooting the shit. 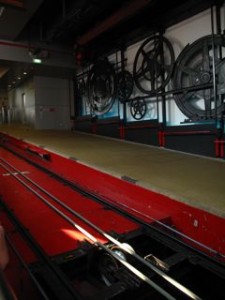 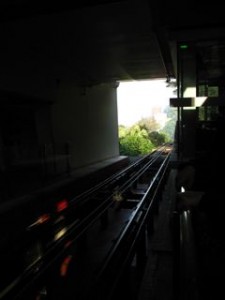 Victoria Peak can be a great place to get a view of Central and Kowloon from above. It is definitely a tourist spot with observation decks and malls and even includes American restaurants like Bubba Gumps, but on a nice day the view is worth seeing at least once. To get there you can take the Peak Tram which is one of the oldest attractions in Hong Kong. The lines can be long, but it’s pretty fun to experience. The tram is pulled straight up the mountain by a giant cable at a very steep angle which allows for interesting views of the nearby sky scrapers. 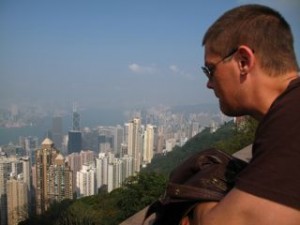 Recently I had two more visitors come to Hong Kong. Dana and Alice recently married and on a family trip to Taiwan after the wedding. I stayed with them in their hotel in causeway bay by the polo fields and we spent the evening in Kowloon walking the avenue of the stars and eating at the Temple Night Market. 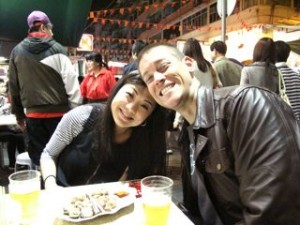 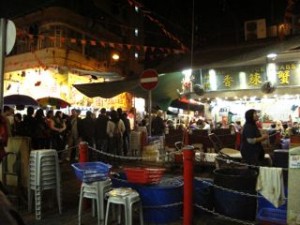 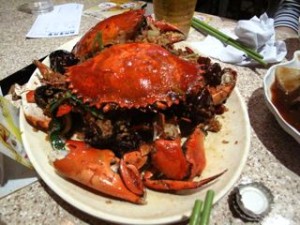 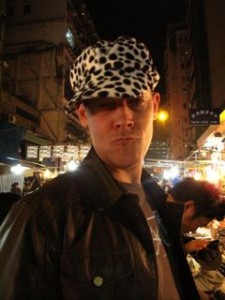 I have to say that the seafood at the temple night market may be one of my favorite places to experience the hustle bustle and get some dam good food. We feasted on Whelk (sea snails) razor clams and spicy crab. Dana, who doesn’t even like crab even expressed that he rather liked it. Afterward we headed back to Central, I got them a bit lost and then we headed to crazy bar/club land. I vaguely remember the ar5ea from Kenneth and my debauchery that was Halloween, but I assumed it was just the holiday that made the area crowded. Boy was I wrong, hundreds of people spilled out of bars and onto the streets from the winding bar streets lined with empty taxi’s. It was sight out of Bourbon street or the Marina on steroids. As far as the scene and the crowd goes, not my style. However buying 7-11 beers and sitting on the steps and people watching? Definitely my style.
The fashion was probably the best part of people watching. As Dana looked for beauty, Alice an I looked for new styles and ideas to wear. We watched as waif-like women strutted by in impossible shoes dangling on the arm of some European. This experience also definitely made me realize my age. 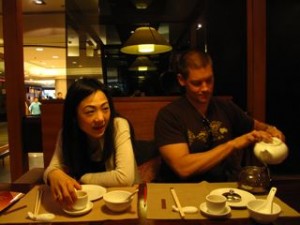 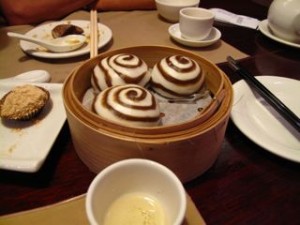 Sunday morning, well, afternoon, we headed out for some dim sum and settled on the 10th floor of Times Square where we ate slowly and particularly. A little more elegant and stylized than Maxim’s it was still a treat and quite good.

One Response to Visitors